Madrasa Ben Youssef is a timeless masterpiece that has more than 6 centuries old.

The exquisite decoration and tall walls distinguished this Madrasa. And what is exciting is that it still has the same appearance from its founding until the present time. Since its construction, empires that ruled over Morocco expanded this particular school.

For more than four centuries, it was a major destination for students from all over the world.

Today it has become a distinctive tourist attraction. Every year, hundreds of thousands of tourists visit this amazing place.

The History Of A Prestigious University

The establishment of the Ibn Yusef School in Marrakech dates back to the Merinid dynasty. In 1364, Sultan Abu al-Hasan built this monument.

The Saadians renovated this school, though they preserved its initial decoration and architecture.

Madrasa Ben Youssef is the first and largest Moroccan university in the era of the Marinids.

This building was a university campus for students that is containing 132 rooms. The school could house at its time more than 900 students.

Students lived and did their homework in this building. And they used the prayer hall to perform religious duty. 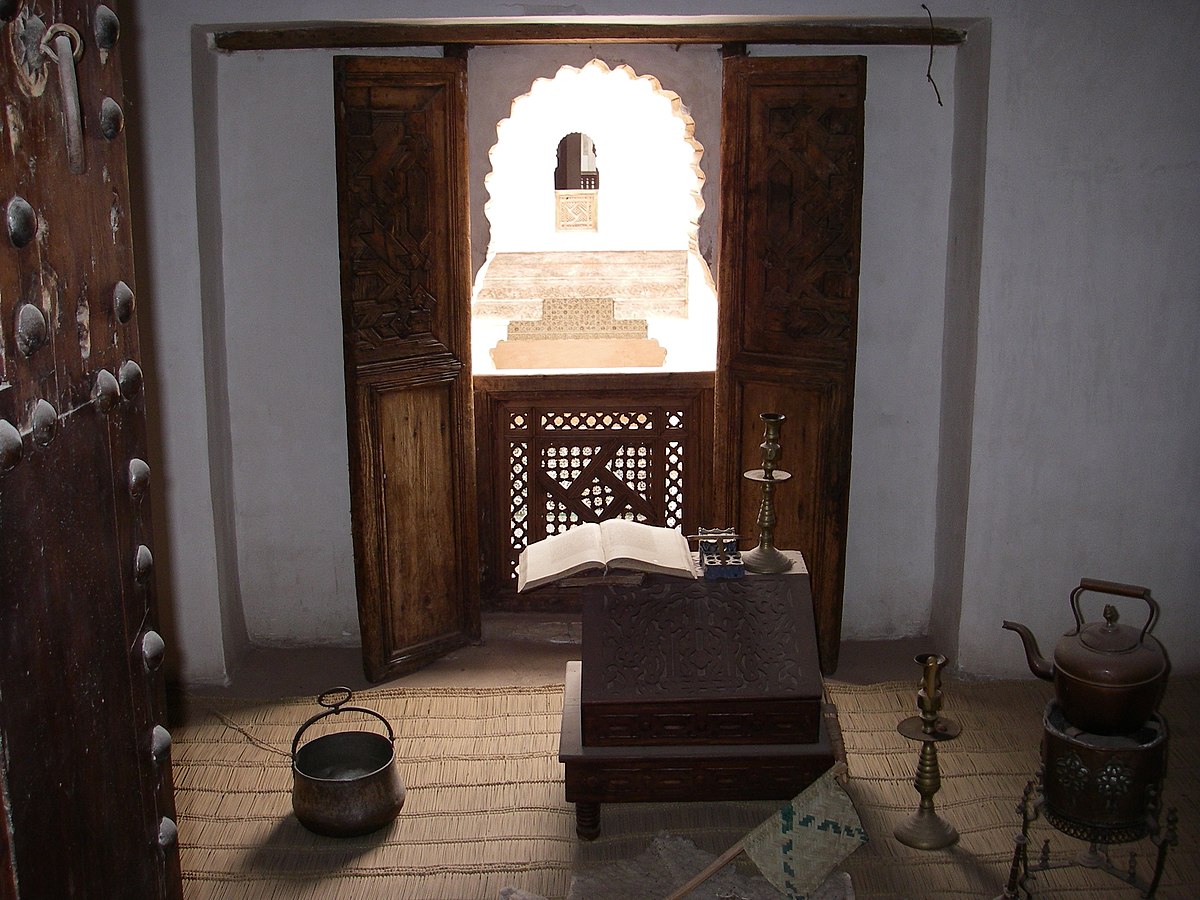 The students received their lessons inside the Bin Yusef Mosque next door.

Through its students, it changed aspects of life in Morocco, Andalusia, and Africa.

During centuries, scholars were migrating between Morocco and Andalusia. They were teaching and learning many disciplines, and particularly religious jurisprudence.

Ben Youssef was an important center that helped to the spread and development of this science.

The Ben Youssef Madrasa is an authentic architecture masterpiece. It is a record of Moroccan art and a sign of a flourishing civilization steeped in history.

Two things characterized this monument. The symmetry of its architecture and the splendor of its decoration.

The main building is square-shaped, with an area of 1680 m. 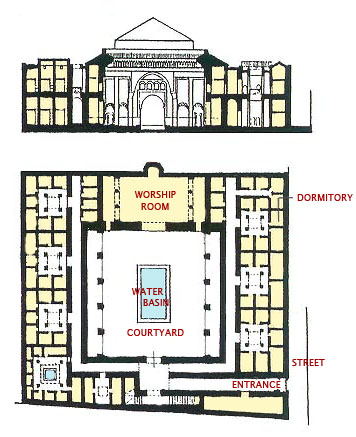 You can identify an open central courtyard in the south portion. As for the remaining sides, three balconies hold the students' rooms.

The entrance to this school consists of a sculpted bronze door. As well as a dome with shapes made of gypsum illustrating colorful writings.

After that, you can access the center of the building through a corridor.

This corridor has a ceiling with symmetrical openings. Light penetrates softly through these openings.

On the northern side of the building, you can find the prayer hall. It consists of three transverse rooms separated by rows of marble columns.

Inside the prayer room, you can find the mihrab. The mihrab is a semicircular niche in the wall that indicates the qibla.

The mihrab has an elegant decoration with various materials and different colors.

Marble, wood, and gypsum were used to construct this beautiful prayer niche. A small dome with gypsum decoration covered the top of this mihrab. 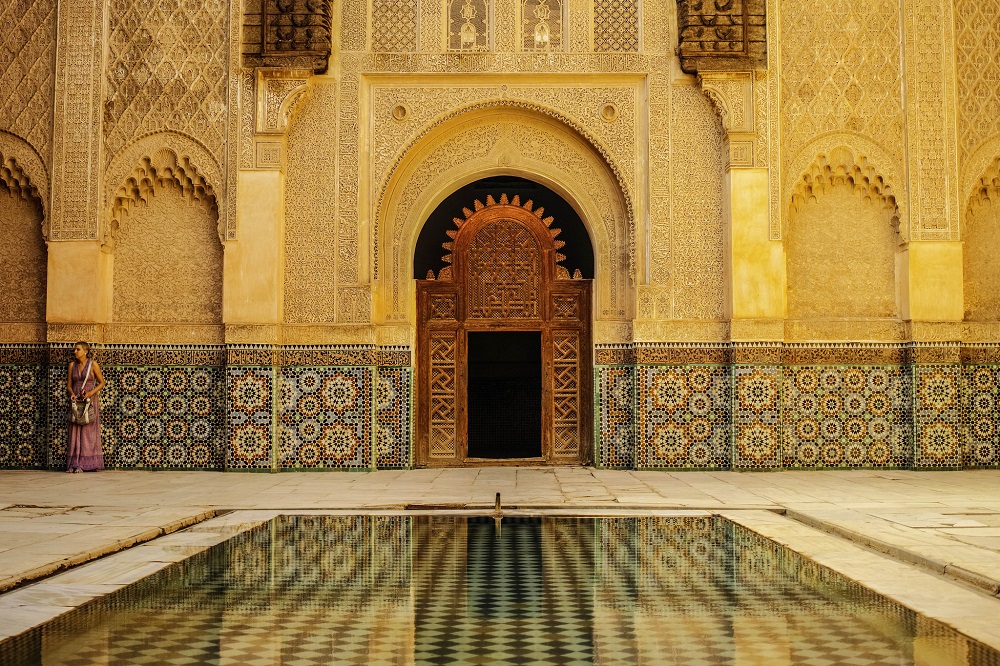 The ablution hall on the western side contains a square shape basin used for ablution. It is also covered by a gypsum dome and supported by four columns of marble.

The upper floor has a design similar to the lower level. And there are some 132 rooms for students.

Artisans used many materials in the construction of this architectural edifice: 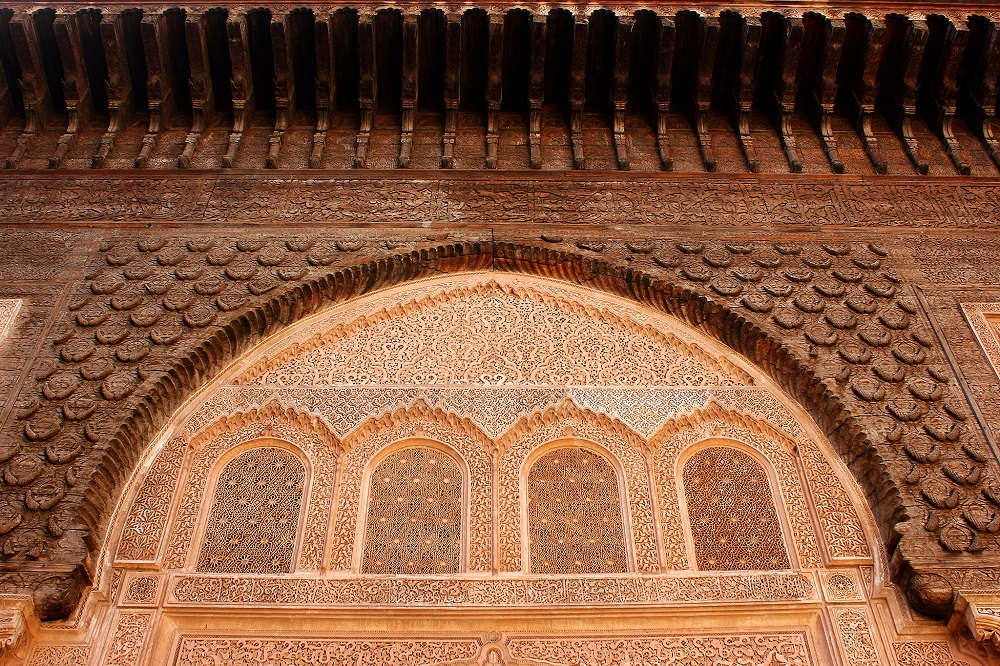 Workers used cedarwood in luxurious domes of the vestibule, the prayer hall, and corridors. 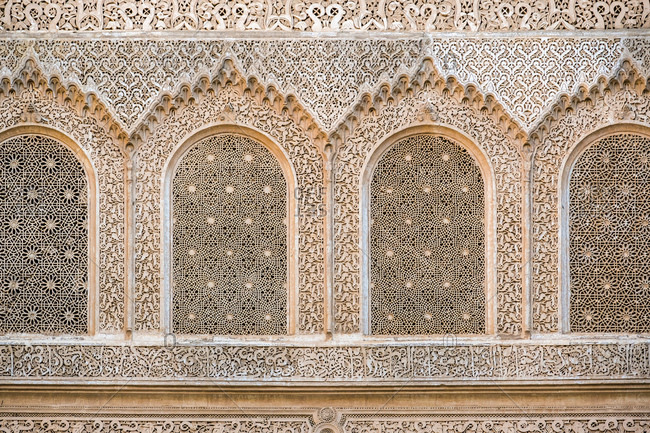 It is the most used material in the building. Even the paintings that cover the facades of the courtyard and the prayer hall are gypsum. 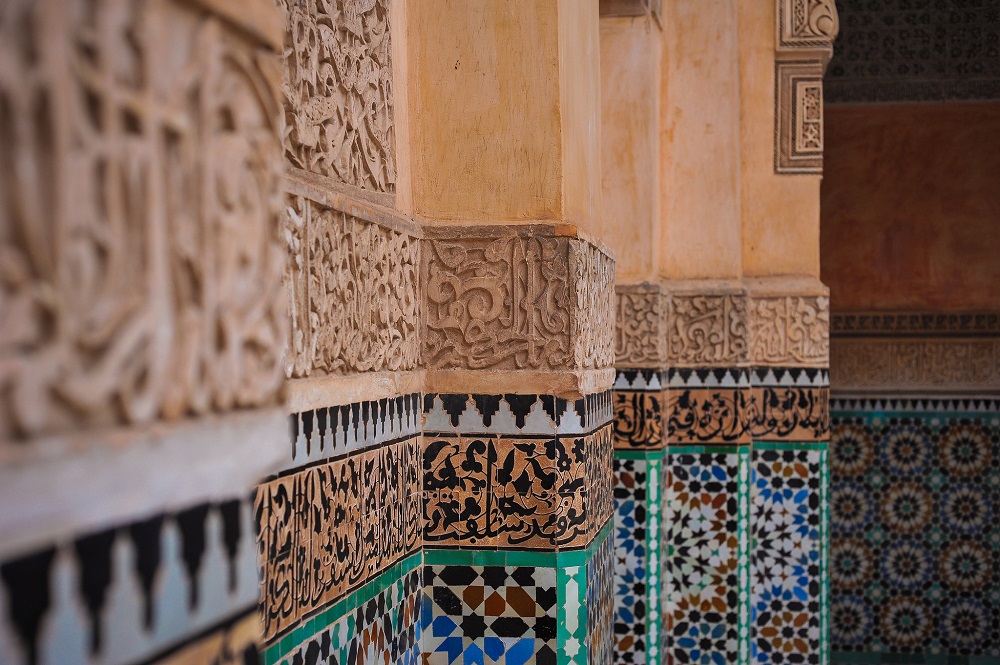 Italian marble covers the floors of the building. Especially the prayer hall and rooms.

Madrasa Ben Youssef is open daily from 9 am to 6 pm.